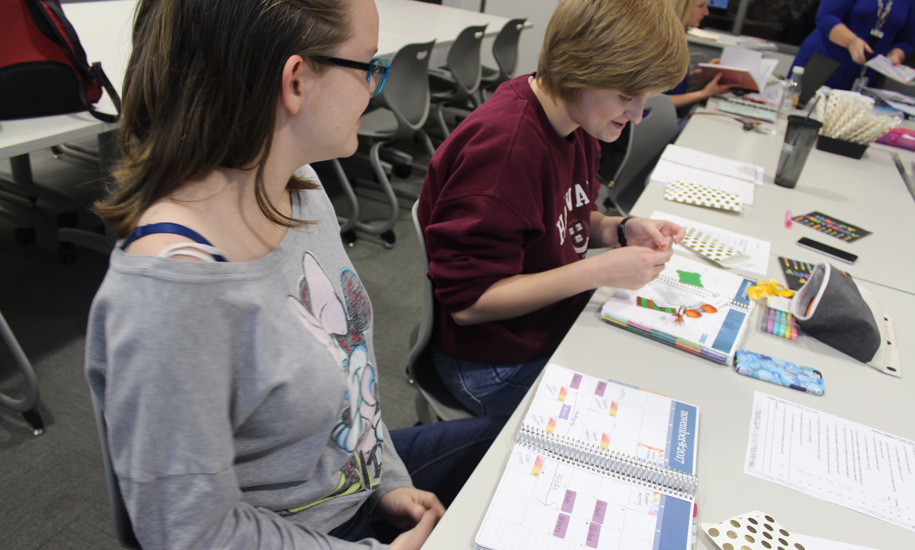 Stickers, colored pens aplenty, and perfectly written in planners are out and visible for the first meeting of the Planner’s club.

Resource teacher Sonja Wilson, the club sponsor, was approached by students interested in starting the club.

“I had two students approach me about starting a club and actually even two teachers as well,” Wilson said.

Because of the great interest not only from students, but also teachers Wilson felt the initiative to be a part of the club, and help it get off the ground.

“I had to meet with Mr. Green and I had to let him know what our purpose was which was to just gather a group of people who like to decorate or plan or who have a planners. And then we had to come up with a group of 15 people who were interested,” Wilson said.

Like with anything, Wilson ran into problems in trying to start the club. These problems ranged as far as getting the word out to finding all the materials for every participant.

“First, it was just spreading the word [and] getting interest in the club because I see a lot people with planners but knowing who they are and if they would have interest was a challenge but also making sure that everyone who wanted to participate could get a planner, so we had to come up with ideas of how we could get planners,” she said.

Even though Wilson would love for a student to take over as the leader of the club, she doesn’t mind much being the leader as of right now because it is something that she is passionate about.

“It’s kind of a passion. I like organizing but also I run a really big family and my kids have been in a lot of different activities and I’ve found that it helps me channel the chaos that life sometimes can be and i think that through that you can get power, you know, so I wanted to be able to kind of pass that along,” Wilson said. “Staying organized, staying sane, I feel like there’s power that comes with knowing what’s next.”

Because Wilson is strongly passionate about the wonders of having a planner, she wants to share that with the students and hopes that the club will really help them.

“But mostly I just want it to be open, for people to have time to actually plan. I find that people want to be organized, they just don’t take time to be organized so setting aside this time, I’m hoping, gives students the opportunity to actually do those types of things,” she said.

The planner/stationery club meets up twice a month for the first Thursday and third Wednesday of every month right after school in room 1004A. The planner club is open for anyone to join, especially if you’re someone who is interested in being organized.

“It’s [a] gathering [of] like-minded people who are interested in possibly learning how to be more organized or who already have an inkling of what it is that they would like to put down onto paper.”