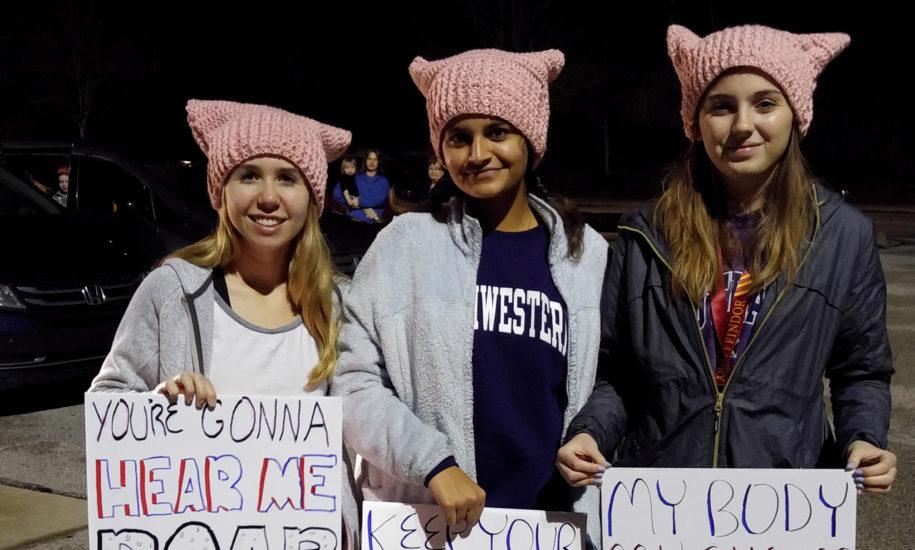 The Women’s March on Washington

An announcement echoed through the school during seventh period, calling the majority of the band to their practice room. However, senior Pragya Chandra was not one of the band members leaving class early to hear the new announcement about the band’s departure.

“For me it was a no-brainer that I wouldn’t be going – never for a second did I consider it a possibility for me,” Chandra said. “To me, marching in the band parade was like marching to show pride in Pence’s leadership, coupled with Trump’s, and it isn’t something I can possibly be proud of.”

Even though she didn’t travel with the band, Chandra had another reason for being in D.C. the day after Donald Trump’s inauguration. She was just one of the 4,876,700 peaceful protesters, according to womensmarch.com/sisters, who came together in 673 different marches, spanning across fifty states and over seventy countries, as a part of the Women’s March on Washington .

“To me, the message was that we will resist and we will not back down,” she said. “The march helped me realize the magnitude of solidarity that’s being formed because of this election. I was afraid I was alone for a while, but this march helped me understand that we won’t give up.”

The experience of marching for a cause that she believes in was not only inspiring for Chandra, but it also served to somewhat revive her faith in the future.

“I know now that I have so many people with me in this and it feels amazing knowing I’m not alone. The hundreds of thousands of people who marched are all on my side. We’re on the same side, and I feel empowered,” she said. “I can’t imagine doing anything else, and I know that even though the march is over, this fight is not.”

Like Chandra, English and ENL teacher Janet Van Der Dussen had the opportunity to attend the Women’s March on Washington on Saturday.

“I heard about it on Facebook and it just grew very quickly,” Van Der Dussen said. “Then a friend of mine talked about it and we decided to go together.”

Van Der Dussen, like Chandra, also made the choice to travel to D.C. instead of simply going to one of the other marches in Indiana.

“It was very significant to go to D.C. for me, because I have very strong opinions about the previous election and I felt like I really wanted to be at the center of everything that’s going on,” she said.

Both Chandra and Van Der Dussen were able to have the unique experience of being part of this vocal community.

“ I think the thing that really stood out in our minds was that this is really America, because there were age groups there, there was a three-month-old baby there with her mother, I talked to an elderly woman who was there by herself, 88 years old, who was marching. There was every kind of gender you can think of, every nationality, every religion,” Van Der Dussen said. “I think a lot of us have been feeling pretty hopeless, so it was probably one of the most exciting, inspirational, motivating experiences that I have had in my life.”

Students who are interested in becoming politically active have many opportunities, according to Van Der Dussen.

“Whatever political discipline you belong to, there are ways to get involved in Columbus,” she said. “I would get involved at the grassroots. I would find a community of people who feel strongly the way you do and get involved with that community and share your feelings with them. Don’t let yourself become isolated.”