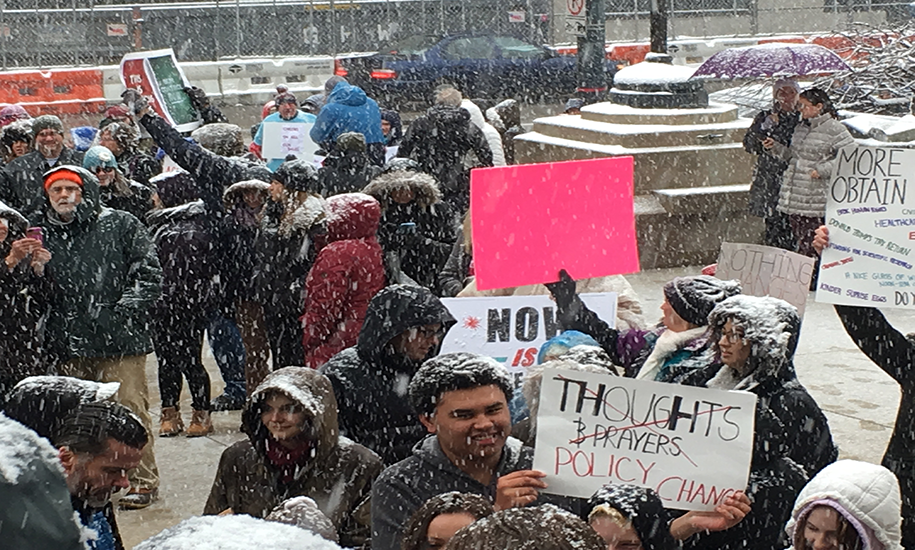 March For Our Lives Opinion

Thousands of people lined the streets, March 24, surrounding the State House to participate in the Indianapolis March for our Lives. The march was something that I was really interested in. I come from England where you can’t carry a gun with you at all times. In fact, not even the police carry guns on them at all times, so I have never understood the need to do so, which made me want to participate in the march even more.

I am the type of person who will voice their opinion openly. It just so happened that the week before the March I had gotten into a heated argument with someone about gun control over Instagram. I will be the first to admit that I probably said some things that were incorrect. But, that was one thing that the march did…it educated people. So, I now feel that I could go back to that person and not only state my own opinion in a different way, but also educate them on the cause a little more.

There are many misconceptions about the purpose of March for our Lives like; Are you trying to ban guns? Are you trying to repeal the second amendment? What’s the actual purpose? I thought I would do my best to share my opinion and why I decided to participate in the March.

Are you trying to ban guns? No, it would be impossible to fully ban guns. However, I do want to ban assault weapons. But, what I really want is to apply more regulations on guns to keep people safe. If there were stricter background checks then maybe some people’s lives could’ve been saved.

Another regulation that people are trying to impose is education. If you are going to own a gun you should be educated on basic gun safety. You should know to keep the ammo and gun separate and you should have a safe, locked up area to house them so that children especially cant get to the weapons. I also would like to see legislation passed that will stop people from being able to purchase and use bump stocks like the Vegas shooter used. Bump stocks are extremely dangerous modifications for guns that make it possible for people to shoot multiple rounds and injure and kill more people.

Are you trying to repeal the Second amendment? Again, no. Although amendments have been repealed in the past, I personally don’t ever see an end to the 2nd amendment, too many people would fight to keep it. Let’s take the 21st amendment for example. In 1919, the amendment banned the sale and consumption of alcohol, but really soon after people started smuggling and bootlegging it, speakeasies were created and gangs took over the country in droves to sell the most booze. But the funniest thing is that the drinking rate actually increased after the ban. Things seem a lot more appealing when you can’t have them. I think this is what would happen if guns were completely banned. If guns were 100 percent banned people would want them even more and the black market would just grow. That could lead to even more gun-related crimes. But the main thing to remember is, just like with the 21 amendment, people will fight it. If the idea of repealing the Second even made it to the floor there would be a huge uproar, so many people would try and fight it that it would be kept, that’s how democracy works.

What’s the actual purpose? Well, there isn’t necessarily a  single ‘purpose’. The whole movement is focused on safety and change, but to narrow it down to something I haven’t talked about yet, one of the big things being pushed is voting people out of office that has accepted money from the National Rifle Association. A lot of politicians are being bribed by the NRA to vote the way that the organization wants. Think of it in a historical point of view, the NRA has become like the political bosses of the early 1900s, they are using these politicians to push bills that benefit them and shut down ones that don’t. The real problem though is that a lot of people don’t see this as a particularly bad thing, but if you really look at it how it is it’s really unethical and in a way destroys the ideas of democracy that this country holds so dear. If the representatives you vote for are being controlled by the NRA then you still aren’t getting what you should be out of your government. When you vote for representative or a senator you are picking people to represent your voice in the Senate and the House but if those people are voting for what the NRA wants then they aren’t taking your voice into consideration. Another thing to remember is that when the representatives and senators vote on bills they should have the people in mind, that’s technically who they are employed by and whose safety and well-being should be at the forefront of their minds. So, when they vote in the way that the NRA says, they should they may be forgetting about your safety and well-being. And you may ask yourself, why don’t these people just vote their own way? Well, these people have proven that the money that the NRA is supplying them is obviously worth more to them then the people they are supposed to be voting for. They want the checks to keep coming and that’s why these people should be voted out of office. You should want people who do their job properly and think about the people they are representing, not people who only care about unethical practices and money.

But, I understand that that was a different time. Which also may be why a lot of adults don’t fully understand the reason to fight. They haven’t had to grow up in the same world we did, in fact, the other day I heard someone refer to the US as a war zone. Unfortunately, the more I think about it, the more I realize how true it is and the worst part is that it happens so often that everyone is desensitized to it now.  This is why things need to change. I understand that you may not feel as strongly as I do about the cause, but everyone should value their lives and as terrible as it is we have to fight for it.