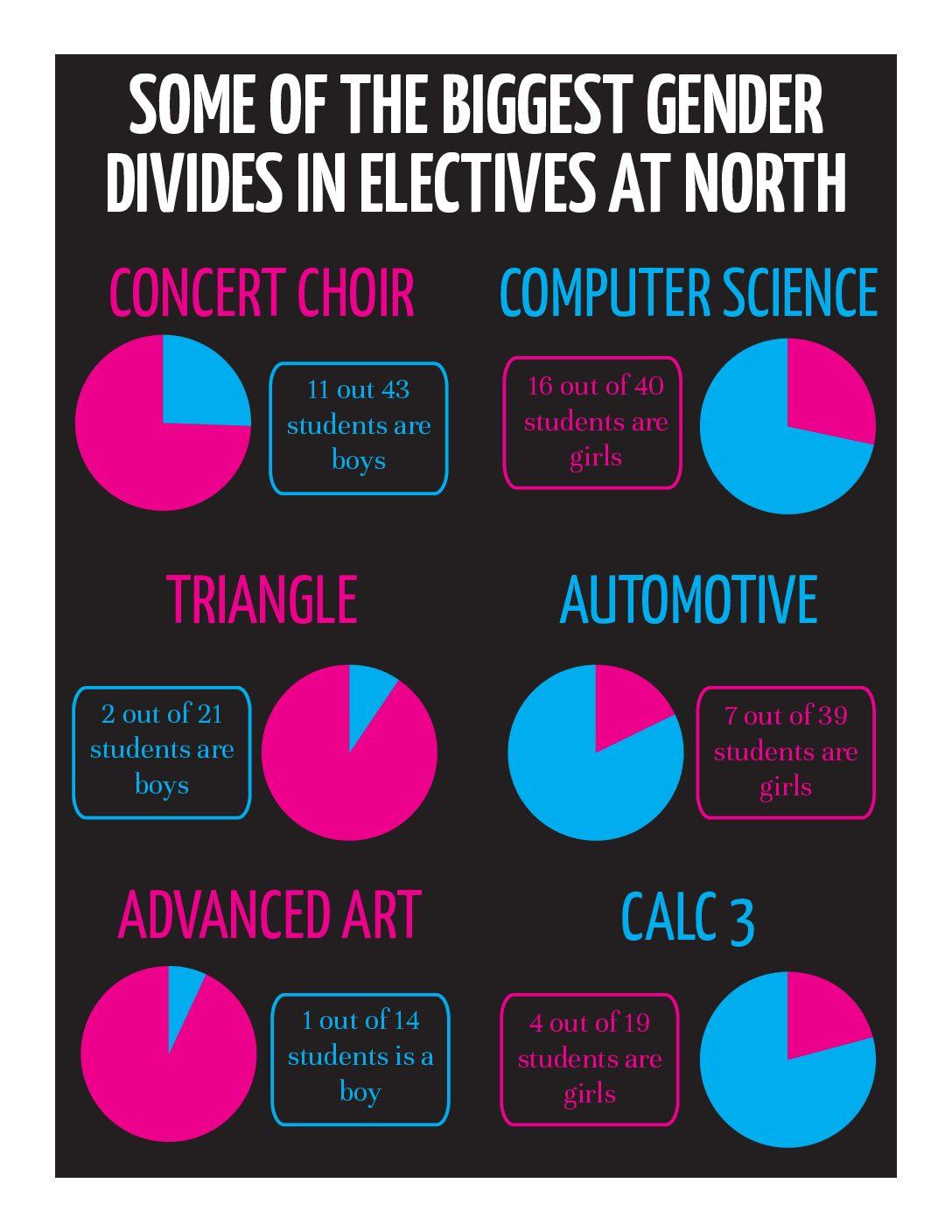 “I doubt that a lot of boys are interested in journalism.”

We hear statements like these all the time. Despite their stereotypical nature, often times they still hold true in many schools across the country, including here at North. When it comes to elective courses in high school, there can be a pretty obvious gender divide.

One of the classes with the largest gender disparity at North is Calc 3. Out of the nineteen students enrolled in the course, only four are girls. Automotive classes and computer science courses have a similar imbalance; only seven of the thirty-nine automotive students are girls, and girls make up less than 40% of students enrolled in computer science classes. However, gender disparities in electives aren’t only found in favor of boys. In concert choir, only eleven of the forty-three students are boys. On the Triangle staff, there are twenty-one members, and only two are boys. An even greater difference exists in Advanced Art: out of fourteen students, there is just one boy.

Why does this gender divide exist? Some people might say that most boys simply aren’t as interested in performing arts or writing courses as girls are, and most girls don’t find engineering and math classes as fascinating as boys do. But why does that statement hold true? Why do girls gravitate towards certain fields of study while boys are more interested in others?

According to the New York Times, girls tend to lean towards subjects considered more traditionally feminine and boys towards those considered more masculine because they have internalized the expectations that society has put on them based on the stereotypes regarding the traits of their gender. These stereotypes have an influence on the hobbies, interests, and future careers of young men and women.

Since society stereotypes men as more logical and physically capable than women, boys are more likely than girls to choose electives that focus on these characteristics, such as advanced mathematics courses or construction and automotive classes. Adversely, society stereotypes women as more creative and emotional than men, so girls choose performing arts and journalism classes more often than men do.

However, there is no need for these social stereotypes anymore. In the past, they reflected society’s primitive need for gender roles in order to function. In modern society, however, no one benefits from these obsolete stereotypes that divide classes based on gender identity. Since the educational experience can only be enhanced and improved upon by the introduction of diversity, girls should be encouraged to take part in male-dominated classes that they have interest in, and vice versa.

Many initiatives to place girls into more STEM courses are already in action, but there should also be programs in place to support boys who wish to be involved in what are stereotypically seen as more feminine classes, such as choir or theatre, since often times these boys are the most affected by gender stereotypes and are subjected to bullying and teasing for pursuing their interests.

Encouraging boys and girls in high school to follow their passions no matter the social stereotypes surrounding their dreams is critical for removing the stigma surrounding “feminine” or “masculine” subjects and careers. Getting rid of these stereotypes for teenagers at North would result in not only a more accepting school environment, but a generation of accepting, well-rounded adults in the future. Although it’s easier said than done, and the gender divide in elective courses may not go away anytime soon, supporting the kids enrolled in classes that are mostly made up of students of another gender is the first step in breaking the barriers around outdated stereotypes that should no longer play a role in determining what classes students sign up for.