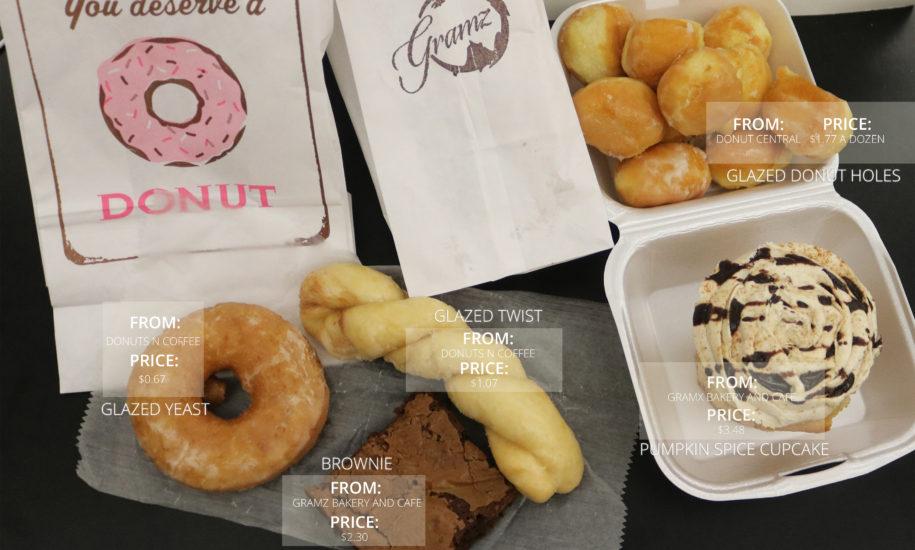 I look through the glass case at the mouthwatering donuts, perfectly lined with each other. Not only do they look fluffy, but they look soft. They have just the right amount of moisture in them and with one bite it feels like I’m in heaven.

There are several donut and pastry places in Columbus. Some of the most well known places are Donuts N Coffee and Gramz Bakery. Recently another donut place, Donut Central, opened on Central Ave. It is opened from 6 a.m. to 2 p.m. I was able to go to the grand opening of Donut Central and compare their products to Donuts N Coffee and Gramz Bakery products.

Donut Central is a really nice place, it was colorful and it felt homey as soon as I walked in. There were several donut options to pick from. After taking a long time to choose, I ended up buying a dozen glazed donut holes. The donut holes were fresh and warm.  Since the donut holes were fluffy it made them bigger in size. Not only were they really good, they were also cheap. A dozen donut holes were $1.77. Even though I got donut holes for a really cheap price, there were other donuts that were more expensive. The more fancy donuts with flavored icing and cream inside had a higher price. A dozen of mixed donuts is around $15. Compared to other places, $15 is too much for a dozen donuts. There is a mixture of expensive products and cheap ones, but overall Donut Central was a great place, and had great donuts.

I also went for the first time to Gramz Bakery and my first experience was also really good. The place itself was really comfy and welcoming. The cafe was clean and looks like a go to place after a long day. Everyone is friendly making the service great.  Gramz has a wide variety of pastries; they vary from brownies to cookies to cupcakes. I purchased two pastries, the brownie and pumpkin spice cupcake. The brownie was impressive; it was rich, moist and baked to perfection. It  was warm and it had a slight taste of coffee inside of it, making it unique. The pumpkin spice cupcake was also really good. It was soft and held its flavor. The icing was sweet and creamy. The prices were a bit high, but for the quality of the product it was worth it. Overall I had a good experience at Gramz.

Later on I went to Donuts N Coffee. Donuts N Coffee has always been my favorite. It is welcoming and the employee are friendly. A lot of people say they have the best products in town, and I agree. They have several different types to choose from. I bought a plain yeast and a glazed twist, and as usual, they did not disappoint. Both donuts were fluffy and sweet. The prices for their baked products do not go over $2, making Donuts N Coffee very affordable. As predicted, going to Donuts N Coffee is always a good experience.

All three places are great and have a fantastic staff. I had a great experience with all of them and their baked products were unbelievably good. Not only were they freshly made, most of them had affordable prices. Donuts N Coffee, Gramz Bakery and Donut Central are my top picks and it will be hard to compete against them.