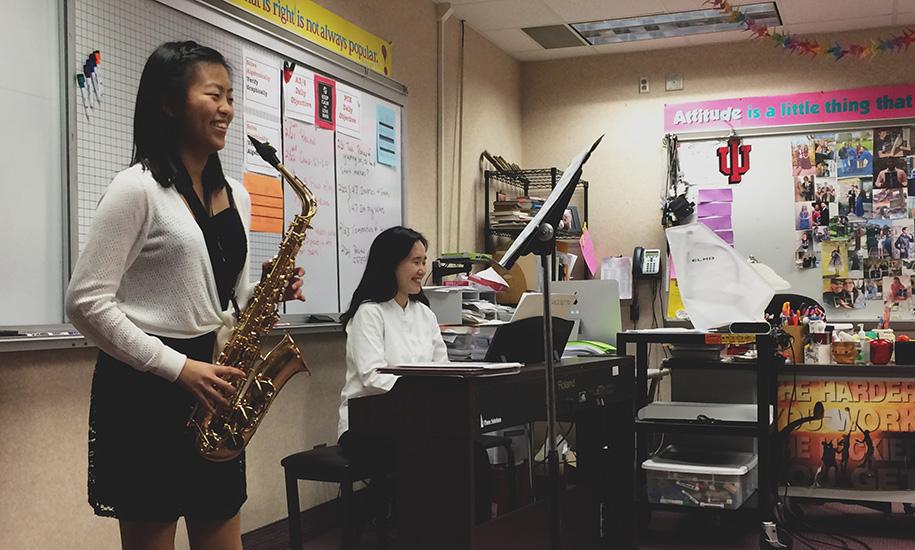 This past weekend, students throughout the band program took part in Indiana State School Music Association’s State Competition. The nerves ran high for those in all categories of entrance, from solos to ensembles. Individuals participating in the competition performed in front of judges in the hopes of receiving the highest ranking of gold for their performance. Sophomores Juli Soda and Olivia Thomas were both one of many who participated in the competition through various forums.

“I entered state in a sextet because I was asked to be in it and I enjoy being a part of a group like that can make a great sound,” Thomas said.

However good sound did not come easily, it was through months of preparation that musical selections were perfected for the competition.

“I practiced my solo regularly during my resource or after school whenever I had time,” Soda said. “We met as a quartet on Mondays and Fridays, and practiced as a sextet on Thursdays.”

Thus it was through this extensive preparation that many students grew both musically and technically.

“I have grown as a musician because the music was difficult and it helped push my music skills and improve my intonation and also my vibrato,” Thomas said.

Although for forums such as ensembles, growth was also found in terms of the group.

“I think we learned how to cooperate as a group because one person couldn’t just play all of the parts at once,” Soda said. “We had to work together and blend our sound to make the music sound good as a whole.”

When it became time to perform in front of a judge, it was through the reliance of months of practice and a support group that nerves were dulled and the performance was at it’s best.

“I didn’t feel too nervous because I’ve performed in front of a judge before,” Thomas said. “I was also with my group and we’d practiced a lot so it was performed well.”