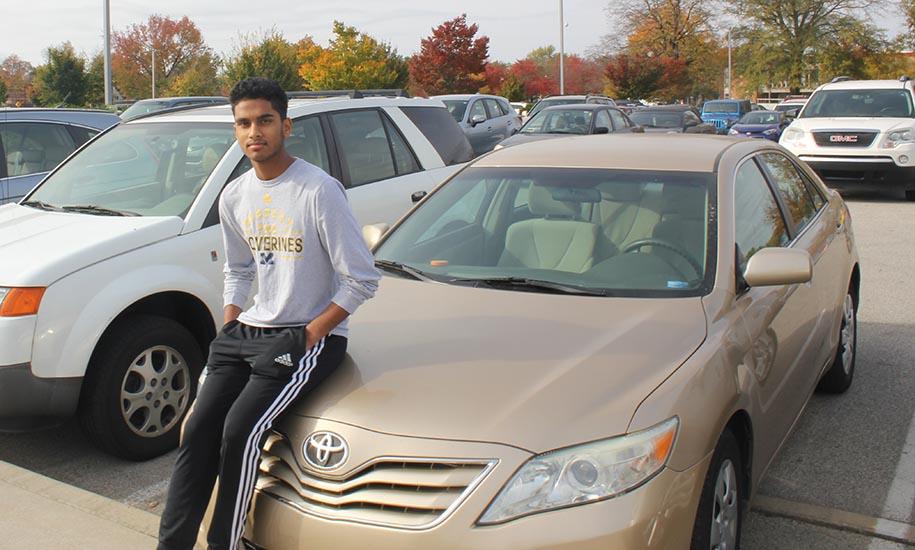 In September, freshman Kameron Harman’s friend was in a car accident. It happened late at night; her car was hit by a distracted driver who ignored a stop sign at a four-way stop.

“Her car flipped three times before landing,” Harman said. “She came out with only a few scratches and bruises. The nurses had said that if she had not had her seatbelt on, she would have died.”

When Harman heard about the accident, she was worried for her friend.

“I wondered if my friend was okay because the crash was such a severe one,” she said.

Although Harman’s friend was not seriously injured, crashes caused by distracted driving can be fatal. According to the Indiana Department of Transportation, every day, an average of nine people are killed in crashes that involve a distracted driver.

“Anything can happen in a fraction of a second,” Columbus Police Detective Chris Couch said. “Vehicles have limits, and drivers are responsible for knowing those limits.”

Couch is in charge of the local Precision Driving Course for Teens, a program run by the Columbus Police Department. There are four classes a year, with around 20 students per class. The majority of the students are teens and senior adults.

“The program is in its 14 year, and is geared towards new drivers,” Couch said. “It was started after we analyzed accidents that occurred locally in southern Indiana among new, young, inexperienced drivers. We looked at the causes and contributions to the accidents and tried to duplicate some of the same driving scenarios in our course.”

The course is an outdoor track and includes several different scenarios.

“One is when tires go off the road. Another is what we call the evasive maneuver. We go high speed around obstacles without brakes to simulate highway accidents, like the interstate or even US 31,” Couch said. “We use cones and tight lanes so the drivers are pressed to react.”

Couch said the most-valuable lesson students learn is that they have a limit to their own driving abilities.

“The driver decides the safety of the vehicle. Even if you have a fast, fancy car or a big truck with

four-wheel drive, you need to recognize the limits of your driving ability and the limits of the car itself,” he said. “It’s the knowledge that you’re not invincible. “Maybe you can’t necessarily maneuver safely around obstacles at a high speed. You’ll recognize that in this course, and you’ll gain a respect for driving. The course is designed to make drivers safer and more conscientious.”

According to data provided by the police department, the most local crashes involving teens have to do with texting. Typically, testimonies inform the police of whether or not cell phone use was a factor. For more severe accidents, they use call records and timestamps.

Senior Tamim Noor has never been in a car crash, but since the end of July, he’s had his license and has been on the road.

“[It’s important to] not pay attention to my phone while driving,” Noor said. “Being distracted for even a second can be risky because you never know when the car in front will suddenly brake or another one veers in.”

Freshman Makenna Calabrese knows from experience how risky distracted driving can be. Seven years ago, she and her family got in a car accident when they were driving home from Greensburg.

“A lady ran a red light and hit me and my family,” she said. “It was about 7 or 8 p.m. She smacked the front of the car. We spun three times and smashed into the car on the other side of the intersection.”

Nobody was hurt in the accident, but Calabrese remembers feeling terrified and panicked.

“I was young, and all I could tell the paramedics was that I had my seatbelt on and I felt fine. But I was more worried about my parents. I was in shock the whole night and scared to drive for a little while after,” she said.

Calabrese thinks it’s important for people to know the dangers of distracted driving.

“You don’t only have to watch the road, but also what other people do. In a matter of seconds you could be in a wreck and holding onto your life,” she said.

Many new drivers participating in Driver’s Ed are learning to follow the rules of the road. Freshman Nicolette Guenther said that once she gets her permit, she will keep her eyes on the road at all times and refrain from texting and driving.

“Looking at one simple text has cost the lives of many,” Guenther said. “You need to think before you act.”

Couch encourages all teen drivers to take part in the Precision Driving Course for Teens.

“It’s important to know your escape options to prevent dangerous scenarios. You need to plan ahead and leave enough room in case you need to get out,” he said. “In the program, you get a better understanding of your driving ability.”

For many drivers, driving is fun and enjoyable.   However, all drivers must be aware of their surroundings,” Noor said. “Don’t take driving for granted. A life is on the line.”